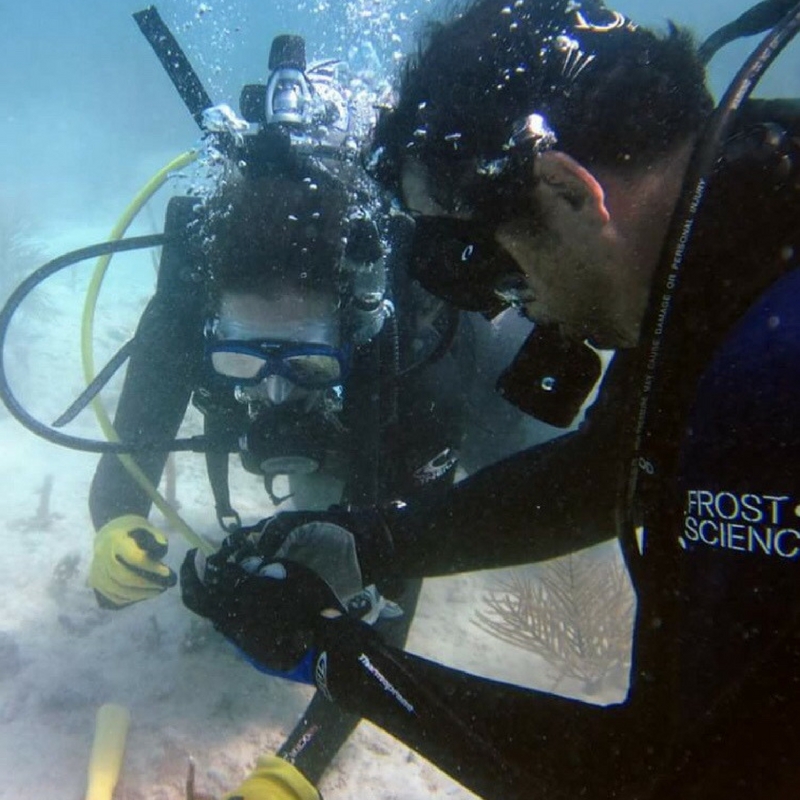 Coral reefs are one of the most important ecosystems in the world, with over 500 million people depending on them for food, coastal protection and income from tourism. Florida is fortunate enough to have the only shallow reef in the continental U.S. near its coast, the Florida Reef Tract. This living structure is the third largest barrier reef ecosystem in the world. At almost 360 miles long, it serves as South Florida’s first line of defense against flooding and storm surge, especially during hurricanes. Coral reefs act as a breakwater offshore, which means they reduce wave energy before waves hit the coast, reducing the negative impact on land. And not just by a little—scientists have found healthy barrier reefs can weaken wave energy by 97% and wave height by 84%!

As our oceans continue to warm and become more acidic, it is increasingly difficult for corals to thrive and provide sufficient protection for our coasts. Scientists estimate that less than 10% of the Florida Reef Tract is living coral, which can mean a lot less offshore help during extreme hurricane seasons. However, thanks to coral restoration efforts, researchers and citizen scientists are working avidly to increase these statistics.

Frost Science is partnering with the University of Miami’s Rescue a Reef (RAR) program to do just that. Designed to support coral reef research and restoration activities, RAR provides hands-on opportunities for recreational divers to participate in coral restoration efforts outside the walls of a laboratory, and in the field. Participants visit underwater coral nurseries off the coast of Miami to gather and maintain fragments of staghorn coral (Acropora cervicornis), then help plant these new corals onto nearby reefs.

This partnership is one portion of Frost Science’s recently unveiled Conservation Program. The main objective of the Conservation Program is to engage Miami residents in habitat restoration. So far, Museum Volunteers for the Environment (MUVE), under the leadership of Miami-Dade County, has engaged over 8,000 volunteers in restoring over 25 acres of coastal habitat. Soon, the program will be expanding its efforts underwater, with coral conservation and research.

In the Inventors in Residence Lab at Frost Science, Dr. Rivah Winter, Curator of Aquarium Content & Marine Science, and Dr. Andrew Baker, an Associate Professor of Marine Biology and Ecology at the University of Miami’s Rosenstiel School of Marine and Atmospheric Science, are working to make nursery-grown corals more stress tolerant. Hardier corals, more able to withstand the planet’s warming oceans and frequent devastating bleaching events, would be a pivotal development in current coral restoration techniques. Their hope is to boost the corals’ thermal tolerance before they get outplanted onto nearby reefs so they are not the next climate change victims. Working with staghorn corals collected by RAR from the nursery, the coral team is running stress-hardening experiments in the Inventors’ Lab. Once they are ready, the stress-hardened corals will be planted on reefs off of Miami with RAR and monitored for success. To kick off these coral restoration efforts, Frost Science husbandry staff joined RAR for their first citizen science trip of 2018. With a team of experienced divers on board, RAR put the staff to work at their Key Biscayne Nursery maintaining and populating coral ‘trees.’ Coral trees are made of PVC pipes, allowing coral fragments to hang and receive enough water and nutrient flow. Frost Science divers attached three species of coral on a new ‘tree:’ finger coral (Porites porites), staghorn coral and elkhorn coral (Acropora palmata)—all useful in restoring complex, healthy reef communities. At the same time, other divers were removing algal and barnacle growth with wire brushes and gathering fragments of staghorn coral to take to the second site for outplanting.

The next stop was Diver’s Paradise Reef. Frost Science staff dove down into the Bay and put their underwater construction skills to the test. Using masonry nails and zip ties, they hammered and attached approximately 75 staghorn coral fragments to this wild reef. With air to spare, the team enjoyed the underwater site and even removed a long rope of marine debris entangled in the reef.

“We are thrilled with our day of coral restoration with Frost Science and look forward to building on this initial success,” said Rescue a Reef’s senior research associate, Dalton Hesley. We at Frost Science agree—it’s the start of a wonderful partnership and only the beginning of Frost Science’s dive into coral reef restoration.

You can watch our coral team in action at the newly-opened Inventors in Residence Lab from 11:00 a.m. to 3:00 p.m., daily. The lab is located in the Knight Learning Center on Level 5 of the North Wing. For more information, please click here.