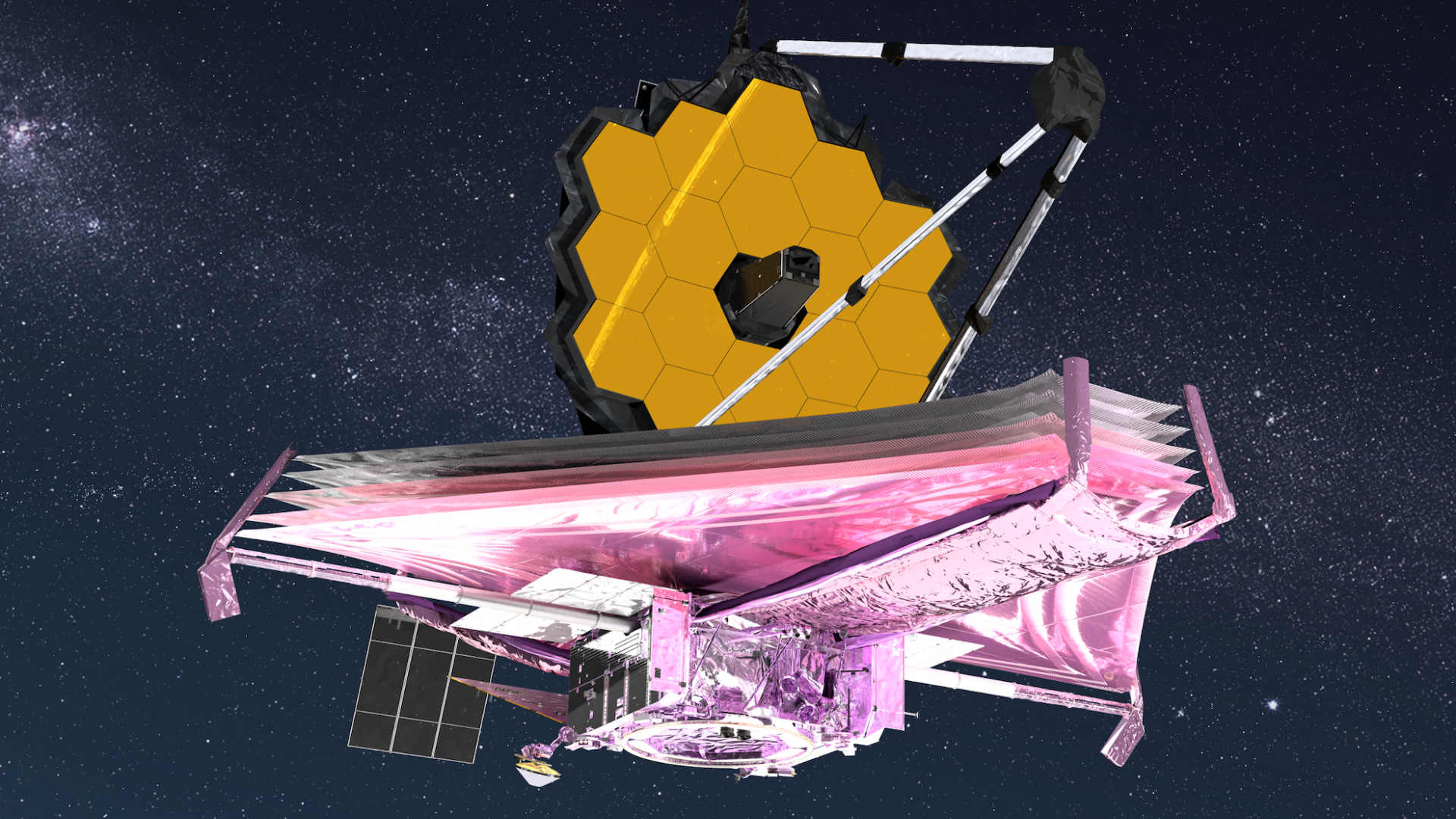 When you think of time travel, your mind automatically goes to science fiction classics. Maybe it’s a boy and his geriatric friend traveling forward in time to save his family’s future or a group of superheroes returning to their past to try to reverse a universe-changing snap. Although human time travel is still only found in fictional worlds, the upcoming launch of NASA’s new James Webb Space Telescope (JWST) will allow us to see back in time to the first stars and galaxies that formed billions of years ago.

Wait, so you’re telling me that the JWST will allow us to look back in time to the beginnings of the universe?
Scientists believe so! The JWST research team focuses on four pillars:

How will it travel back in time?

Think about it this way. Light travels at about 300,000 kilometers per second (or 186,000 miles per second). At this speed, it takes about eight minutes for light to be released from the Sun and travel to us here on Earth. The rays on a sunny day are actually eight minutes old – meaning we are not actually seeing the Sun in real time but rather an eight-minute-old Sun!

Now apply this to other stars that we see in the night sky. You may know that most stars are lightyears away. A lightyear is the distance that light travels in one year, or 9.46 trillion kilometers (5.88 trillion miles). The nearest star, Proxima Centauri, is 4.2465 light-years away so the light from this star is actually a little over four years old. Many of the stars the JWST telescope will study are tens millions of light years away. If we were to stand on a star 65 million light-years away and look towards Earth, we would probably be able to see dinosaurs through a telescope.

How far back in time will the James Webb Telescope be able to see?

The JWST is the most powerful telescope ever built. With its technological advancements, including a suite of highly sensitive gold-plated mirrors and a sunshade the size of a tennis court, it will be able to detect light emitted by the very first stars and galaxies. This will give us a glimpse of what the universe looked like after the creation of the universe about 13.5 billion years ago. 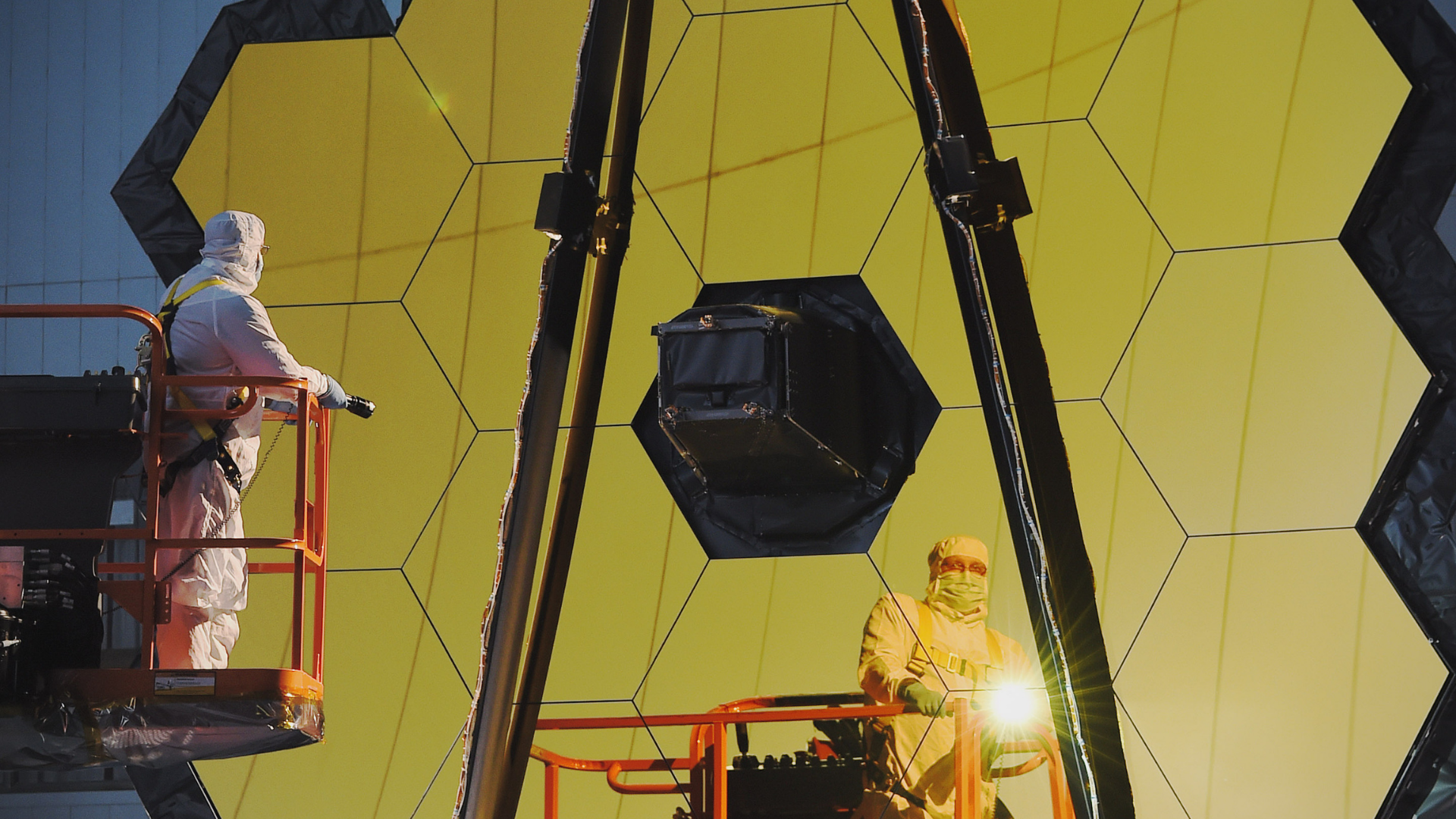 How is it able to see that far?

The JWST has a mirror much bigger than any telescope deployed in space. The larger the mirror a telescope has, the more light it can capture. The large primary mirror is 6.5 meters (21.3 feet) across and is composed of 18 smaller hexagonal mirrors. Each small mirror is plated with a very thin layer of gold, the metal best suited to reflect infrared radiation. The JWST’s setup and improved sensitivity will allow the mirror to pick up longer wavelengths from further back in time.

This highly advanced telescope will also be much farther from Earth than even the famous Hubble telescope. After its launch, it will travel 1.5 million kilometers or one million miles to the outer edges of Earth’s gravitational field. That’s the same distance as about four one-way trips to the Moon.

What’s the deal with infrared radiation?

The JWST was developed as an infrared telescope because of the effect the universe’s expansion has on light travelling from hundreds of light-years away. With this telescope, astronomers will be studying the light given off by the first stars and galaxies. However, this light has been travelling a long time to reach the JWST, meaning that it will have been stretched by the expanding universe from visible light to a longer wavelength of infrared radiation. This is called redshifting.

The JWST will also explore exoplanets that potentially can support life, but visible light doesn’t allow us to see through the sometimes-cloudy atmospheres. Because of its longer wavelength, infrared radiation can cut through any interference, producing a more detailed picture of inside nebulas, dust clouds, and galaxies.

Because the JWST is looking for infrared radiation, its images could be compromised by any other incoming light and heat from other stars or heated objects. To prevent this, NASA engineers designed a five-layered sunshield that will keep the mirror and instruments at a chilly –220 degrees Celsius. Perfect weather for stargazing in space!

What will it look for?

The JWST will be searching the depths of the universe for protoplanets (rocky bodies in the process of becoming a planet) and stars, to identify the origins of their evolution. Specifically, this telescope will help identify the chemical makeup of the gases and solids that make up our universe’s first building blocks and shine a light on the physical forces behind the formation of these first celestial objects. The JWST will also look for exoplanets that may have liquid water on them (a potential sign that we may have living galactic neighbors!). Scientists will also gain more knowledge about the formation of black holes in the center of galaxies and the location of dark matter.

Why was the JWST created in the first place?

The most technologically advanced telescope being used today, the Hubble Telescope, is aging at 31 years old. In the course of its lifetime, Hubble has helped discover countless new planets, moons, and galaxies, explore nebulae and black holes, and quantify the approximate age of the universe. However, the Hubble telescope can only read visible light and only orbits 340 miles away from Earth, creating some limitations for seeing the outer reaches of space. The JWST will allow us to see farther beyond our Milky Way and possibly solve some of the unexplained mysteries unearthed by Hubble itself.

When and where will the launch occur?

The launch of the JWST is planned to take place on December 24, 2021 at 7:20 AM EST. The JWST is being launched from the European Spaceport in Kourou, French Guiana. The location is optimal as it lies by the Equator, giving an extra push to the launching rocket by Earth’s spin.

When will we start getting to see these hidden galaxies and solar systems?

One of the biggest engineering challenges of the JWST is its transportation. This telescope is larger and must travel farther than any other telescope created, meaning it needs to be lightweight but sturdy. To meet these needs, engineers at NASA designed this telescope using lightweight materials like beryllium and using folding mechanisms to save space.

Once the JWST is launched, it will take its first 28 days to unfold and expand its mirror and sunshield. Then the telescope will send back preliminary images to NASA at the end of January 2022 to check if light is being captured correctly by the primary mirror. However, we won’t be able to see much at this stage as the telescope will need to be adjusted and focused. NASA will release the first scientific quality images by the end of March 2022, and in June 2022 full mission operations will begin.

Have more otherworldly questions on the brain? Launch your curiosity into the inspiration behind spaceflight and explore the physical forces behind the rockets that put humans on the Moon when you visit the Feathers to the Stars exhibition at Frost Science.