Behind the Scenes of Ultimate Dinosaurs - Frost Science

Dr. Cary Woodruff is the curator of vertebrate paleontology at the Phillip and Patricia Frost Museum of Science. Earlier this week, he sat down with Dr. Cassie Freund, director of science communication, to answer a few questions about the science behind Ultimate Dinosaurs: Meet a New Breed of Beast, and just what it takes to put on such an awe-inspiring special exhibition.

Q: What is special about the dinosaurs in Ultimate Dinosaurs? What makes this exhibition different than other dinosaur exhibitions Frost Science guests may have seen before?

A: Ultimate Dinosaurs is such a neat exhibition because it explores the evolution of dinosaurs from the southern continents of South America, Africa, and Madagascar. In most other dinosaur exhibitions, you’ll see the famed and iconic Tyrannosaurus and Triceratops – these are “local” celebrities, meaning they’re from western North America. But Ultimate Dinosaurs introduces guests to completely new and downright bizarre dinosaurs from other continents they’ve never heard of.

Q: The exhibition mainly contains casts of the dinosaurs and their bones, but there are also a few fossils. Can you explain what a cast is, and how they differ from “real” dinosaur fossils? How are the casts made?

A: A cast is a copy that is made from a fossil. First, rubber latex is poured on each side of the fossil. Once each side has cured, or set, the latex sides can be peeled off one another and the fossil. This process essentially makes a mold of the fossil that preserves its shape and surface details. Next, resin or plaster is coated on the outside of the latex to make a hard and strong outer coating. After the coating has cured, resin is poured into the mold, and it will fill in all the details from the latex. Once that has cured, we have a replica fossil. We often paint the replicas, and it can be hard to tell which one is the fossil, and which one is the copy!

In museums, we often – but not always – mount replica bones. A fossil femur (thighbone) from a giant long-necked dinosaur could weigh over 1,000 pounds – a lighter weight copy is much easier to mount! And we rarely find complete dinosaur skeletons, so replica pieces help us fill in the missing bits. Another benefit to using casts is that if the real dinosaur skeleton is mounted at museum, a replica copy that travels from museum to museum lets visitors see it all around the world. And that’s exactly the case for Ultimate Dinosaurs. You’ll see the real skeletons of these dinosaurs in museums in South America, Africa, and Madagascar, but you can still experience and learn from their replicas right here in Miami. 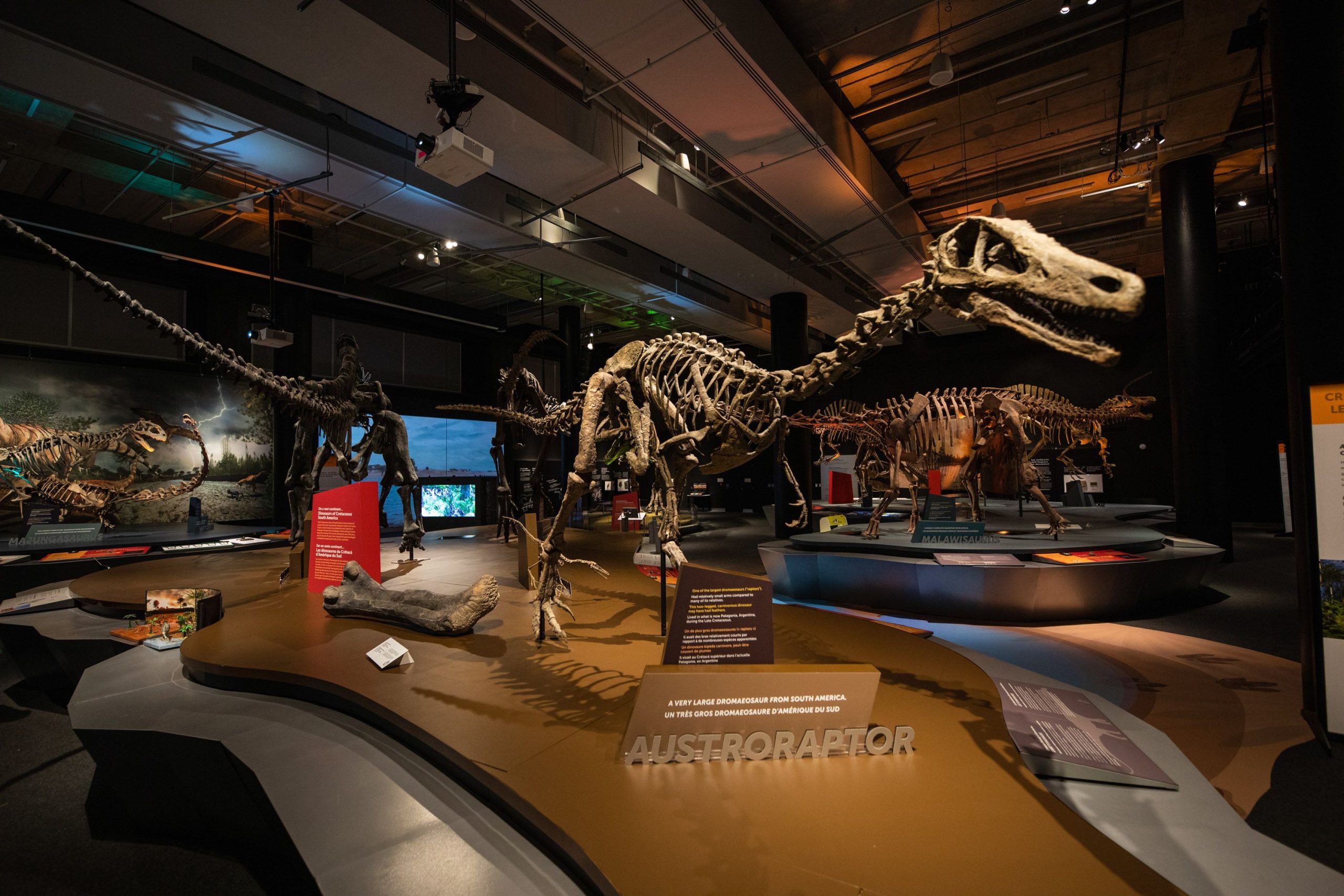 Above Image: Austroraptor, a dromaeosaur from South America, on view in Ultimate Dinosaurs.

Q: Let’s talk briefly about how the components of the exhibit got here. How does an exhibition like this travel? The casts, especially the Giganotosaurus, are huge!

A: It may surprise you, but the dinosaurs are basically just giant puzzle pieces. Instead of each bone shipping individually, many pieces, like the legs and back, travel as single assembled units. So, each dinosaur mount in Ultimate Dinosaurs really is just a handful of pieces that all fit together. Even the Giganotosaurus!

All those dinosaur puzzle pieces – in fact, everything in Ultimate Dinosaurs – fits into large storage crates for shipping. For the skeletons, each piece is carefully placed and strapped inside a crate. If you could have been here for the setup, you would have seen giant crates labeled “Amargasaurus”, “Carnotaurus”, “Giganotosaurus”, and so on. But what surprised me the most was the speed of setup. The crew that put Ultimate Dinosaurs together literally unpacked and fully assembled multiple dinosaur skeletons in a single day. I wish we could have put a time lapse camera up for all the museum guests to see the process!

Q: What is the relationship between what museum guests will see and experience in Ultimate Dinosaurs and the type of paleontology research you do?

A: At its core, Ultimate Dinosaurs is about learning new things about ancient worlds. And that’s what my research focuses on. I investigate dinosaur life histories; basically, understanding how a given dinosaur grew up. Did it grow rapidly or slowly? How did its bones change as it grew into an adult? How old was it when it died? Many of the same kinds of questions are asked throughout Ultimate Dinosaurs. Together, all these bits of information help fill in the puzzle of these remarkable animals and our prehistoric past.

Q: Last question: What is your absolute favorite part of Ultimate Dinosaurs? Mine is Simosuchus, the “pug-nosed crocodile.” I was surprised it was an herbivore since modern-day crocodilians are not.

A: My favorite dinosaur in Ultimate Dinosaurs is Amargasaurus. Amargasaurus is a kind of sauropod (a long-necked, plant-eating dinosaur), and that’s the group of dinosaurs that I specialize in. I’m really interested in how these dinosaurs use their iconic necks, and for sauropods, Amargasaurus has just about the weirdest neck out there because it has unusual very long spines on the back of its neck. For decades paleontologists argued if they were covered entirely by muscles, like a bison’s hump, or if a thin stretched between their spines, like the skin stretched between a bat’s fingers. Or were these spines covered in keratin like cow or antelope horns? It was a real mystery.

But new research – published just this year – has shown that the spines were covered with a thin “sail” of muscles, like we have in our cheeks. But why did Amargasaurus have this unusual feature? Well, we don’t know yet! And that’s what great about paleontology: although we study animals tens to hundreds of millions of years old, we’re learning new thing about them almost daily.

Ultimate Dinosaurs: Meet a New Breed of Beast is presented by the Science Museum of Minnesota. The exhibition was created and produced by The Royal Ontario Museum, Toronto.