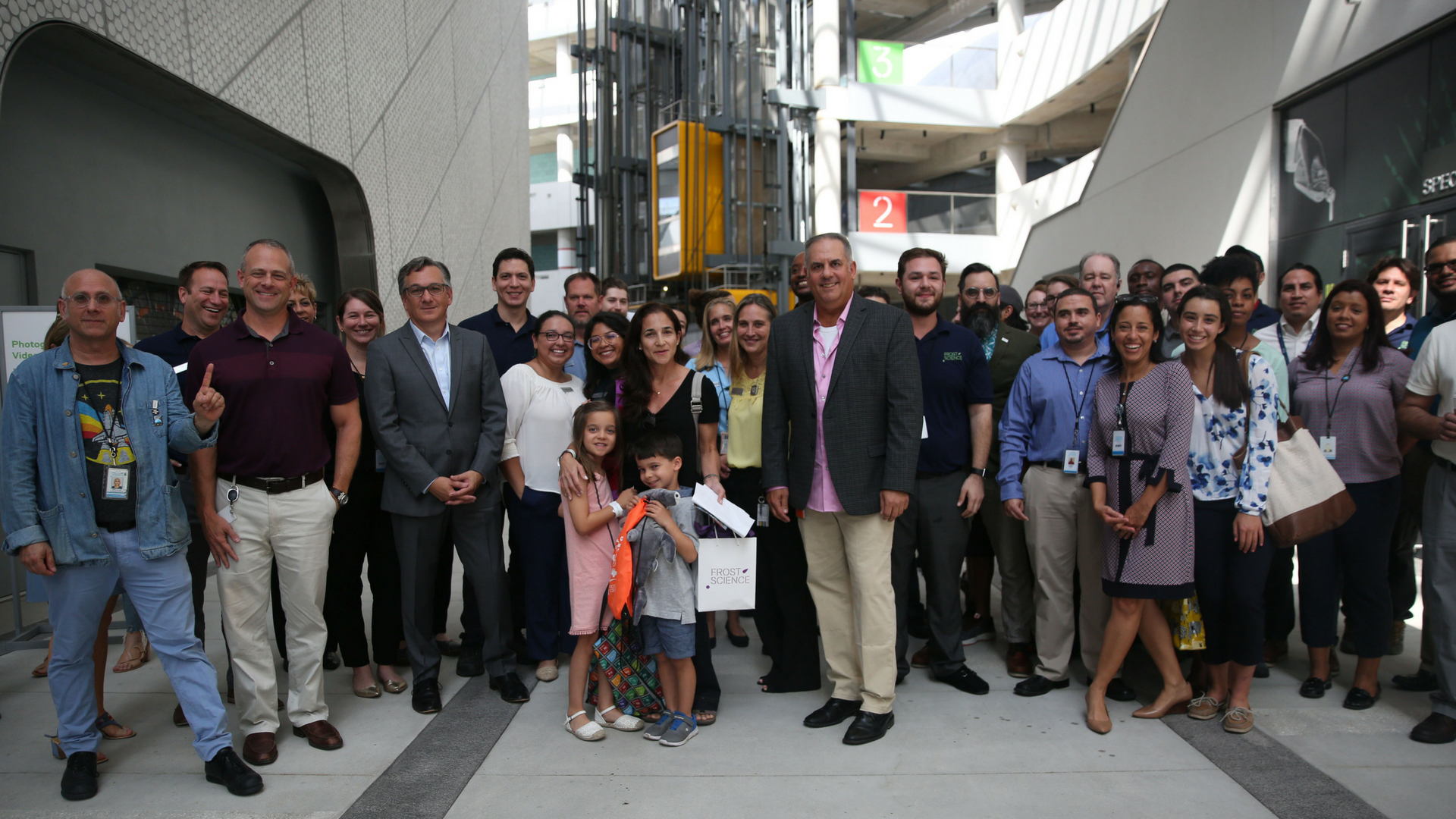 Today, Wednesday, June 20, 2018, the Phillip and Patricia Frost Museum of Science in Downtown Miami’s Museum Park welcomed its one millionth visitor since opening on May 8, 2017. Over the past year, Frost Science has continuously transformed the visitor experience including new exhibitions, special events and programming, along with new educational offerings such as enhanced field trips, camps, overnights and more.

“With the hard work of our team and the support of our community, we are proud to meet this milestone and welcome our one millionth visitor within 13 months of our opening,” said Frost Science President and CEO Frank Steslow. “Frost Science has been welcomed with open arms by residents and guests alike and we are certainly proud of the accomplishments we have made. Together, we have laid the foundation for science-learning and discovery in Miami-Dade County. We will continue to offer new and novel ways for our community to explore the power of science.”

“When we opened the Phillip and Patricia Frost Museum of Science, it was the fruition of a vision to provide our Miami-Dade County residents and visitors access to a world-class, state-of-the-art science museum,” says Miami-Dade County Mayor Carlos Gimenez. “A year later, as the museum welcomes its millionth visitor, that vision is fulfilled and we are excited to see that our community has been taking advantage of this great place that educates children and families on science and technology in fun, inspiring and innovative ways! I am proud of the technological and educational contributions Frost Science makes to our community and wish them much continued success.” To mark the occasion, the one-millionth visitor, Gisel De Renzo, along with her family, was surprised with a 7-night Caribbean cruise courtesy of Royal Caribbean International. Gisel De Renzo also won a Frost Science gift bag with branded items, a $100 gift card to Frost Science and “1 million minutes of science” (a two-year Family PLUS level membership). Gisel De Renzo then went on to enjoy a special museum experience including an animal encounter. Within the hour of the one millionth visitor, all museum guests enjoyed complimentary snacks by local donut shop, Happy Place Donuts, and a special Frost Science giveaway.

“Culture and education serve as necessary ingredients for the City of Miami to evolve into a truly global city. Thanks to institutions like Frost Science, Miami offers both,” said City of Miami Mayor Francis Suarez. “This vibrant museum attracts visitors from all over the world and engages them through fascinating exhibitions, adding yet another layer to Miami’s array of unique activities. By welcoming their one-millionth visitor, Frost Science validates its value as a key player in helping us expand our global reach and enhance our status as a thriving national and international destination.”

Frost Science has welcomed several groundbreaking special exhibitions to its campus since opening, including The Power of Poison: From the Depths of the Sea to Your Own Backyard, SPACE: An Out-of-Gravity Experience, BRAIN: The Inside Story, Monster Fish: In Search of the Last River Giants, SEEING: What Are You Looking At? and The Mechanicals. The museum has continued to grow with supporting grants and generous donations from foundations and corporate partners. Frost Science also had a record-breaking day during the total solar eclipse in August, welcoming over 8,500 guests to experience this once-in-a-lifetime event. Throughout the year, Frost Science has hosted distinguished guests and notable speakers including Cara Santa Maria, Nick Uhas, Dr. Wallace J. Nichols and more. “With the opening of the Phillip and Patricia Frost Museum of Science, alongside the Arsht Center and Pérez Art Museum Miami, Miami’s cultural hub is nearly complete,” said Alberto Ibargüen, president of The John S. and James L. Knight Foundation, a major funder of all three institutions. “Frost Science is a major part of a cultural attraction that is drawing the world, and a multimedia learning space that lets thousands of school children a year engage hands-on with science.”

“The opening of the Phillip and Patricia Frost Museum of Science has further elevated the appeal of Miami and its attractions, which are among the most unique and exotic in the world,” says William D. Talbert, III, CDME, President & CEO of the Greater Miami Convention & Visitors Bureau. “From its magnificent design and stunning waterfront location on Biscayne Bay to its exceptional exhibits and programming, visitors from around the globe are eager to experience Frost Science’s extraordinary offerings.”