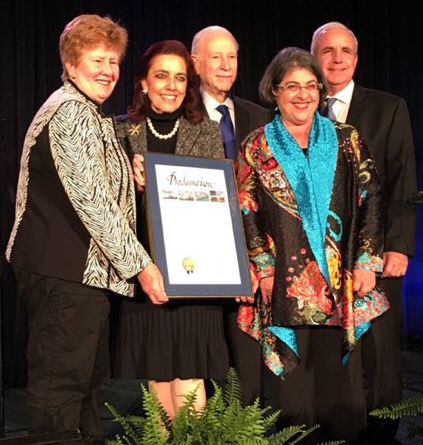 Congratulations to our naming donors, Patricia Frost and Dr. Phillip Frost, for receiving the Greater Miami Chamber of Commerce’s “Sand in my Shoes” award. The award, presented by Miami-Dade County Mayor, Honorable Carlos A. Gimenez, and Florida Blue, part of the Blue Cross and Blue Shield Association, is given to extraordinary community leaders who’ve made significant contributions to the region, demonstrating their involvement and dedication to Miami as an exceptional place to live and work.

“The Frosts have been outstanding contributors to South Florida for more than 50 years, and we could not have selected two finer people to receive this important recognition,” said Christine Barney, Greater Miami Chamber of Commerce Chair, and CEO of rbb Communications. “Their impact reaches far and wide, including medicine, education, art, science, business, technology and philanthropy. The Frosts have not only generously given their treasure, but their talent—to lead, inspire and ensure that the Chamber achieves its ambitious goals.”

The ceremony program, which took place on February 24 at Jungle Island, was filled with special presentations, including remarks by Chamber Chair Christine Barney, Chair Elect and president of Florida International University Mark Rosenberg, as well as a proclamation from Mayor Gimenez and County Commissioners Daniella Levine Cava and Sally Heyman. The event was capped off with a special performance by Shelly Berg and students of the University of Miami’s Frost School of Music; and the annual tribute video by the team at Multivision Video & Film.

The Frosts are generous supporters of local institutions, including the University of Miami and its Frost School of Music, the Frost Art Museum at Florida International University, and of course, Frost Science. Most recently, the Frosts have undertaken to establish the Frost Scholarship Program, providing support for graduates of Florida’s state universities to study for advanced degrees in science, technology, engineering and mathematics at Oxford University.

We are proud to honor the Frosts and thank them for their continued dedication and support.