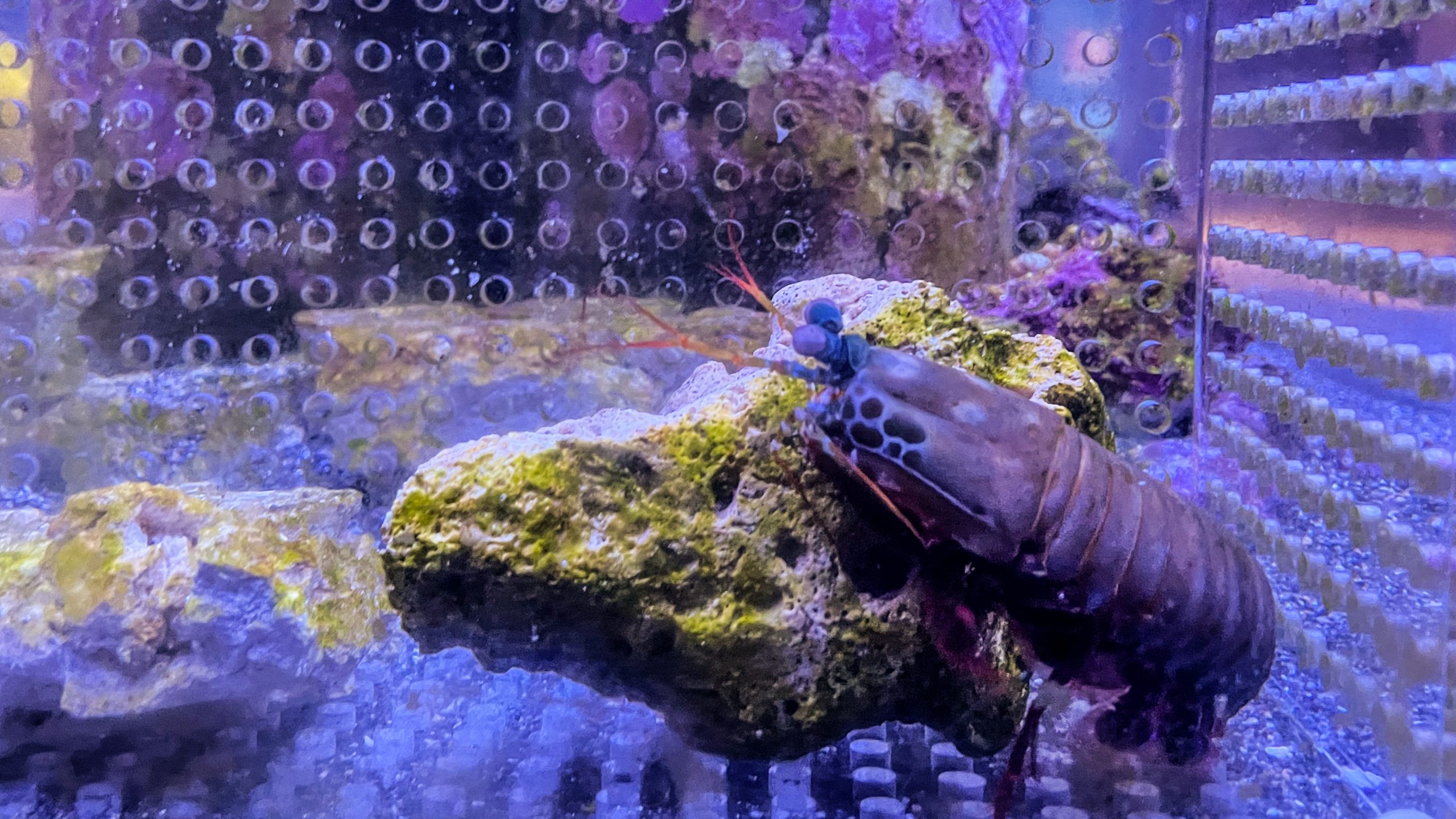 Peacock mantis shrimp are famous—infamous, really—for their powerful punches. These vibrantly colored marine crustaceans have strong limbs they can swing at 50 miles per hour. Peacock mantis shrimp use their clubbing appendages to attack their prey, which include clams, snails, and small fish. They are also highly intelligent, with sharp eyesight capable of detecting ultraviolet light in addition to the visible spectrum. In sum: mantis shrimp are truly remarkable animals.

Their ability to deliver crushing blows also make peacock mantis shrimp challenging creatures to keep in aquarium settings. Aquarists must be extra careful when interacting with them. Since mantis shrimp are powerful generalist predators capable of catching small fish, most are kept solo in their exhibits. However, the innovative husbandry team at Frost Science has developed methods for transitioning mantis shrimp to a community habitat that is safe and enriching for both the mantis shrimp and fish alike.

At Frost Science, we’re taking a different approach with our peacock mantis shrimp and putting her high intelligence to work to target train her. Target training is a common animal care technique in which an aquarist teaches an animal to touch a physical target in exchange for a reward, like food. It is also a great way to keep animals mentally and physically stimulated. 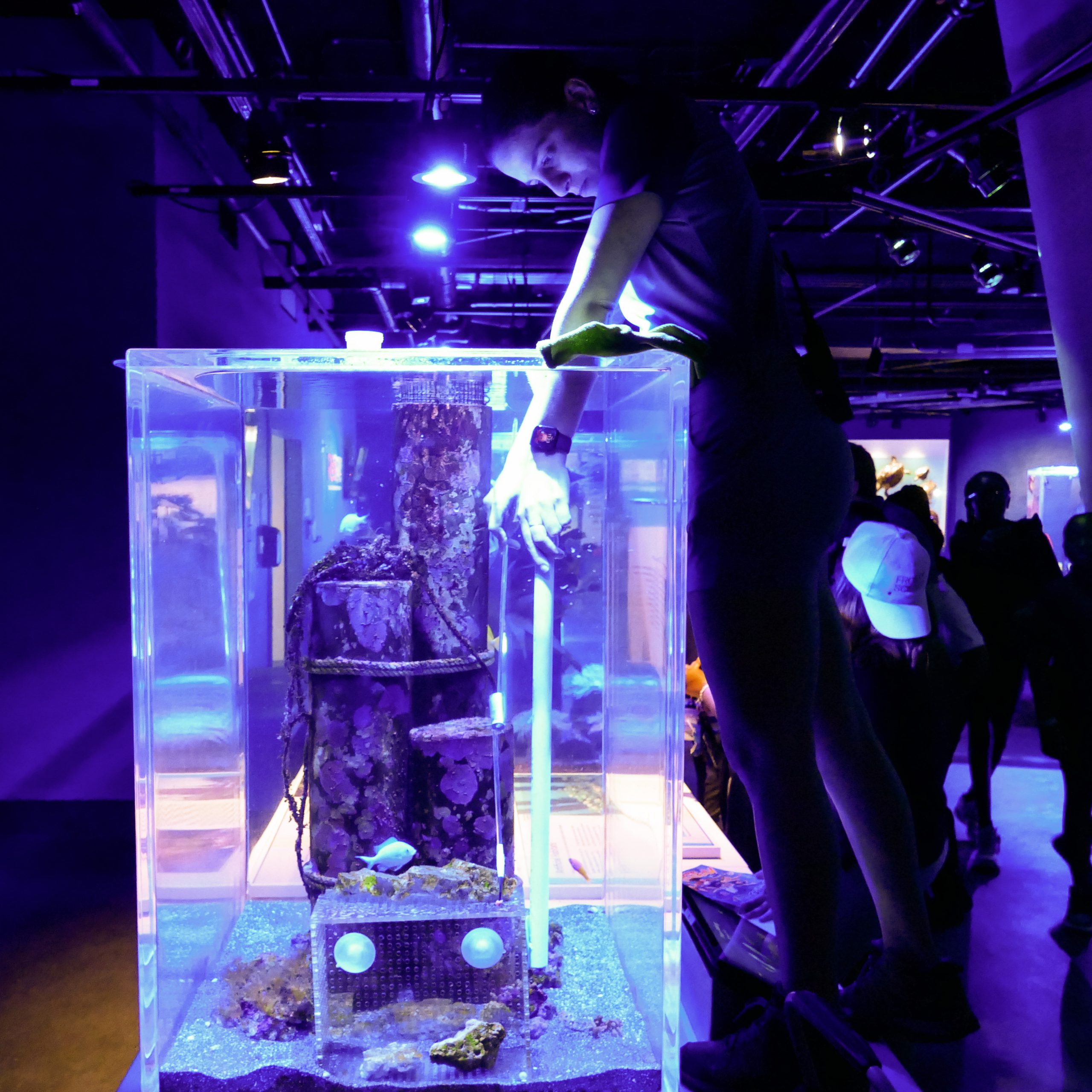 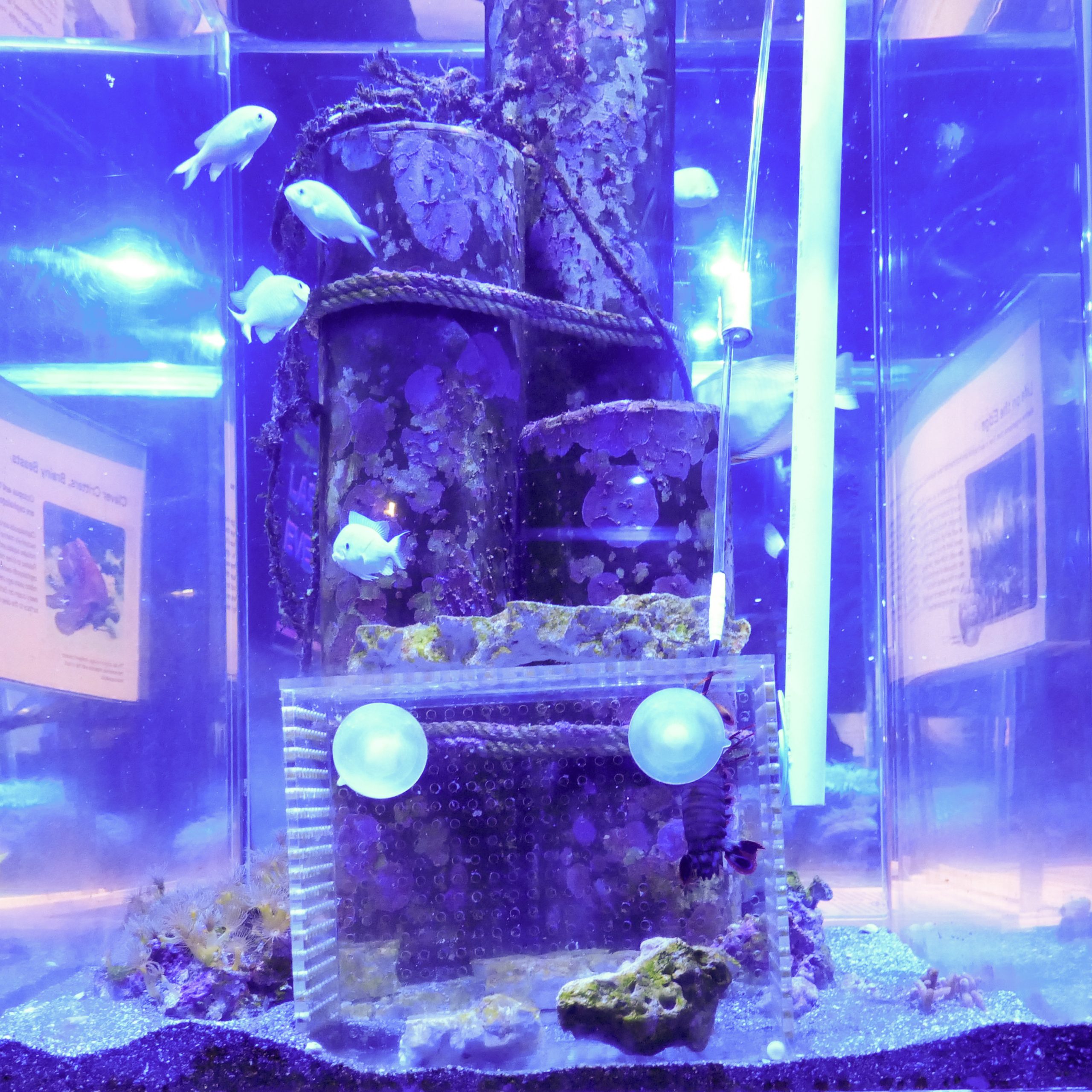 You can see the museum’s peacock mantis shrimp on The Dive level of the Aquarium. She currently inhabits a smaller acrylic box nestled in her aquarium to temporarily keep her from directly interacting with her fish neighbors. Over the coming weeks, Frost Science aquarist Erin Maroon will train her every day to associate the target with food. Erin has been with Frost Science for nearly four years. In addition to her work as an aquarist, she’s also an assistant dive safety officer here at the museum.

As the peacock mantis shrimp learns she can punch the target and receive a tasty morsel, she’ll rely on our food delivery system instead of her fists when it comes time to eat. The goal is that she will eventually be able to harmoniously coexist with the other fish in her exhibit, no smaller acrylic box needed. This more natural setting would be optimal for her, even better than having free roam of a larger tank by herself as you may see at other aquariums.

We know this can work: it has before! The museum’s former mantis shrimp was target trained and could freely roam his aquarium habitat. And this new peacock mantis shrimp is in great hands—Erin is a talented aquarist dedicated to working with her. “By getting to train an intelligent animal and gaining their trust, you do form a bond with them,” she says.

Above: Footage of the peacock mantis shrimp during target training

Erin knows a lot about working with intelligent marine life. Not only is she responsible for the peacock mantis shrimp, but she also cares for the museum’s Pacific red octopus. Octopuses are well known for their intelligence. They have as many neurons (specialized brain cells) as dogs have, and those neurons are split between nine brains. “They’re total little aliens,” Erin jokes. “I’m blessed to work with the two exhibits that have the most intelligent animals in them.”

Frost Science guests who want a chance to see the peacock mantis shrimp’s target training in action should stop by The Dive around midday. If you’re lucky, you’ll see Erin hovering over the shrimp’s aquarium with her target and a bite of food extended into the water. We’ll be tracking and collecting data on the mantis shrimp’s progress over the next couple of months.

She’s already a remarkable animal, and we can’t wait to share her future accomplishments with you!