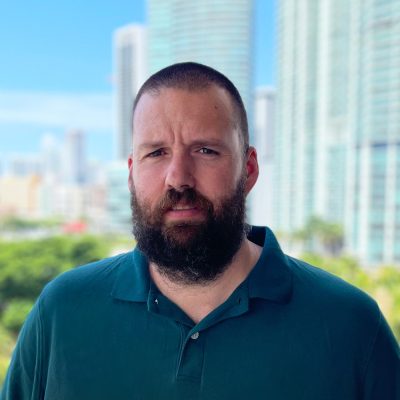 Chris Cain leads the Aquarium Life Support Systems team at Frost Science. The team is responsible for the operation and maintenance of the large filtration systems that keep the museum’s Aquarium exhibits clean and healthy. Cain manages a team of dedicated life support operators that works seamlessly with the animal care staff. In his role, Cain is very hands-on coordinating repairs and service of the complex systems, and overseeing water quality testing.

Prior to Frost Science, Cain worked at Shark Reef Aquarium at Mandalay Bay in Las Vegas, Nevada, where he worked as part of the opening team that built the aquarium. His focus during this time was on the life support side but he was also very involved in animal husbandry. During his 23-year career with Shark Reef Aquarium, Cain also started and operated his own aquarium service company that built and maintained aquariums for private clients and companies. His clients included numerous celebrities and companies, including Bass Pro Shops, Petco, PetSmart, Wal-Mart, and Red Lobster.